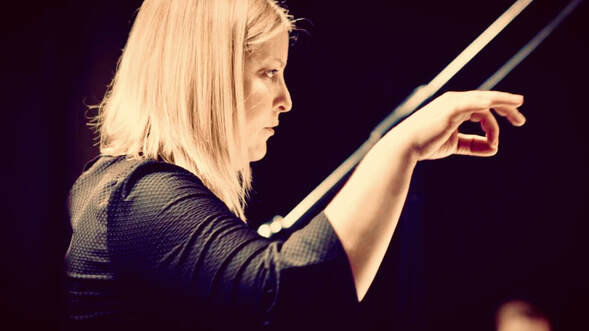 Tell us about you...

I’m a composer for film and TV, and I work in a duo with my partner, Salvatore Sangiovanni in our studio in Praia a Mare, Italy. When I’m not making music, I love to cook and bake. I spend other my free time reading about architecture, art, fashion, and interior design. I am also burning to travel again, which has simply not been possible in the past year!
I was born in New Haven, CT, and after a few months of touring the States with a musical at the age of 20 as assistant musical director, arranger, and pianist, I soon moved to Europe to tour there with another musical for almost another year. I’ve lived in Europe since, for half of my life - first in Berlin, Germany, and now on the west coast of southern Italy.
I love languages and linguistics as well - I actually studied 8 languages when I went to college in New York, but some have gotten embarrassingly rusty since I don’t get the chance to use them (especially the “dead” languages I learned in college like Old Norse!).
In my life - and work - no two days are alike! As a freelance artist, discipline and sensible use of my time is key.
My job does entail lots of creative stuff - obvious things like composing, orchestrating, arranging, and songwriting (including lyrics); I’m also responsible for technical tasks in my studio like recording, music editing, and mixing. I also take care of the business of running the studio such as maintaining our website, tending to social media, negotiating contracts, organizing scoring sessions, etc. The higher the budget for a project, the less non-creative tasks there are which I need to take care of on my own.
There are lots of complex moving parts to consider when I produce a score; my partner and I don’t want to rely on a team of assistants or delegate essential creative tasks. We firmly believe in maintaining our own unique sound and signature composing style. Outsourcing arrangements, orchestrations, or even musical cues to assistants - as many composers in various stages of their careers tend to do - is simply unimaginable, and artistically, out of the question! To me, composing music is very personal, something instinctual. It would be like abandoning my own “babies” to strangers.
One of my favorite parts of the job is to conduct session orchestras of all sizes for our scores. There’s nothing like hearing the best musicians around bring a score to life! It’s exhilarating to finally hear a score outside your head for the first time, to see that director smiling. Since composing can be pretty solitary, it creates a nice social balance to interact with interesting musicians and technicians who are intensely concentrated on a common goal at a session - the pressure, the concentration…I love scoring sessions!
(By the way, I wish there were more women working in recording studios here in Italy, I’m pretty much the only female far and wide, and I’ve been here for over 6 years. I have yet to meet another woman setting up microphones, or tuning a piano, or seated at the mixing desk. Something’s out of whack here! What’s up with that?)
​

What is your relationship to audiobooks?

I’ve been an avid reader for as long as I can remember: having grown up as the youngest in a large family, I was lucky enough to have had older siblings who taught me to read before I even started going to preschool. When I was little, one of my sisters and I used to love recording our favorite books on cassette tapes, acting out the characters’ voices and creating funny sound effects!
During my career in Europe, I’ve had the occasion to record voiceover talents (for commercials, etc.) and have created sound design for “Hörspiele”, German storytelling recordings, in the past!
I’ve worked as a vocal and diction coach for some major record labels, so I always have my ears open for interesting vocal colors, dialects, and accents.
​

I began to follow Marnye on LinkedIn because I was impressed by the quality of her work and her incredible résumé.  When I see her posts, I just love her aura of positivity! She really supports and promotes her colleagues from many different areas of expertise. It’s great to watch Audio Sorceress grow and thrive. I hope to have the occasion to collaborate on an audio book someday, when the right occasion arises!
​

Who is your favorite literary character?

A tough one! Well, I love Ebenezer Scrooge, and his sudden transformation! (I must admit that the great George C. Scott’s iconic performance in that role strongly influenced my perception of that character.)
​

What is your favorite quote?

“Und Jedem Anfang wohnt ein Zauber inne, der uns beschützt und der uns hilft, zu leben.”
“And in every beginning there is a magic which protects us and helps us to live.” -  Hermann Hesse
It reminds me of the excitement in seeing the blank page of music paper, or seeing a film I’m about to score for the first time, untouched by music. You never know how the film may be transformed by the score, or what music might be written yet, and to my partner and I, that anticipation - that sense of tabula rasa - feeds our creative passion and “helps us to live”.
​

How can we get in touch with you?